As major organizations have to learn to deal with increasingly rapid change, teams are becoming more and more important. As the traditional, hierarchical school of leadership diminishes in significance, a new focus on networked team leadership is emerging to take its place. Leaders are finding themselves members of all kinds of teams, including virtual teams, autonomous teams, cross-functional teams, and action-learning teams.
Many of today’s leaders face a dilemma: as the need to build effective teams is increasing, the time available to build these teams is often decreasing. A common challenge faced by today’s leaders is the necessity of building teams in an environment of rapid change with limited resources. The process of re-engineering and streamlining, when coupled with in-creased demand for services, has led to a situation in which most leaders have more work to do and fewer staff members to help them do it.
Research involving thousands of participants has shown how focused feedback and follow-up can increase leadership effectiveness – as judged by direct reports and co-workers (Goldsmith and Morgan 2004). A parallel approach to team building has been shown to help leaders build teamwork without wasting time. While the approach described sounds simple, it will not be easy. It will require each team member has have the courage to regularly ask for – and learn from – ongoing suggestions from fellow team members.
To successfully implement the following team-building process, the leader (or external consultant) will need to assume the role of coach or facilitator and fight the urge to be the “boss” or “instructor”. Greater improvement in teamwork tends to occur when team members develop their own behavioral change strategies rather just executing a change strategy that has been imposed upon them by the “boss”.

Steps in the Process

Before beginning a team-building process, it is important to determine whether the team feels that team building is both important and needed. Some people may report to the same manager, but legitimately have little reason to work interactively as a team. Other groups may believe that team-work is important, but feel that the team is already functioning smoothly and that a team-building activity would be a waste of time.

Step Two. Have a team member calculate the results. Discuss the results with the team. If the team members believe that the gap between current effectiveness and needed effectiveness indicates the need for team building, proceed to the next step in the process.

In the vast majority of cases team members believe that improved teamwork is both im¬portant and needed. Interviews involving members from several hundred teams (in multinational corporations) showed that the “average” team member believed that his or her team was currently functioning at a 5.8 level of effectiveness but needed to be at an 8.7 level.

Step Three. Ask the team members, “If every team member could change two key behaviors that would help us close the gap between where we are and where we want to be, which two behaviors we all should try to change?” Have each team member record his or her selected behaviors on flip charts.

Step Four. Help team members prioritize all the behaviors on the charts (many will be the same or similar) and (using consensus) determine the most important behavior to change (for all team members).

Step Five. Have each team member hold a one-on-one dialogue with all other team members. During the dialogues each member will request that his or her colleague suggest two areas for personal behavioral change (other than the one already agreed on above) that will help the team close the gap between where we are and where we want to be.

These dialogues occur simultaneously and take about five minutes each. For example, if there are seven team members, each team member will participate in six brief one-on-one dialogues.

Step Six. Let each team member review his or her list of suggested behavioral changes and choose the one that seems to be the most important. Have all team members then announce their one key behavior for personal change to the team.

Step Eight. Conduct a mini-survey, follow-up process in approximately six months. From the mini-survey each team member will receive confidential feedback from all other team members on his or her perceived change in effectiveness. This survey will include the one common behavioral item, the one personal behavioral item, and the overall team member item. A final question can gage the level of follow-up – so that team members can see the connection between their level of follow-up and their increased effectiveness.
This four question survey can either be electronically distributed electronically or ‘put on a postcard” and might look like the sample below. 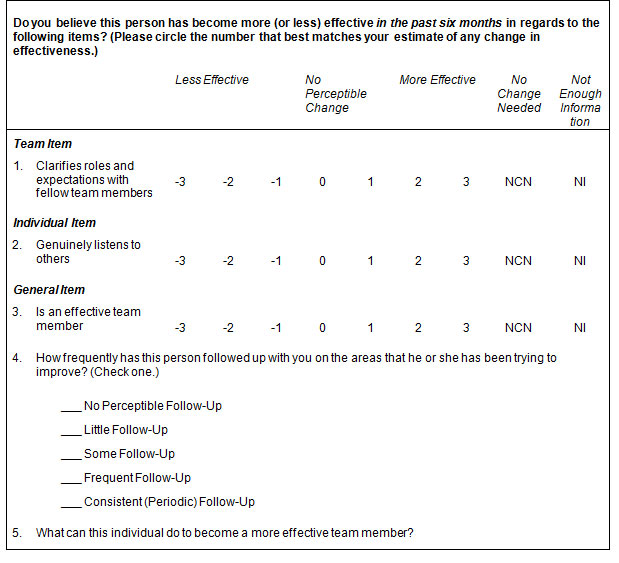 Step Nine. Calculate the results for each individual (on all items) and calculate the summary results for all team members (on the common team items). Each team member can then receive a confidential summary report indicating the degree to which colleagues see his or her increased effectiveness in demonstrating the desired behaviors. Each member can also receive a summary report on the team’s progress on the items selected for all team members.