Even Top Leaders Need to Ask for Support

A historic problem in corporate environments has been the lack of managers encouraging people to ask for help. Things have changed since I started out in coaching, but a reluctance to ask for help is a stubborn trait that people acquire as they go through life.

The process in the Life Plan Review, or LPR, helps people overcome the obstacle of asking for help.

The LPR makes us more accountable for our behavior by making us answerable on a regular basis to other people.

It also allows us to ask for help. It’s got four steps:

This last one is essential: You are not alone.

Back when I developed my coaching business, and I began to acquire more clients at a higher executive level who needed one-on-one coaching to rid themselves of certain tendencies that hurt their progress, I learned to create an environment in which a leader did not feel embarrassed to ask for help.

It harked back to the paradox I noticed at IBM: The company’s leaders thought coaching was valuable for employees, but not for themselves. This was nonsense, of course.

None of us is perfect.

We all should be asking for help.

My breakthrough was reminding my accomplished clients of this eternal truth.

One of the ways I did this was asking them to list all the things they could do as a leader to support the people they worked with. I called this the Needs Exercise: What do your people need from you?

They’d rattle off the obvious stuff: support, recognition, a sense of belonging and purpose. Then they’d go deeper. People needed to be loved, heard, and respected. They needed to feel loyal to something and receive loyalty back in return. They needed to be fairly rewarded for doing a good job, not overlooked or discounted.

“That’s a lot of neediness among your staff members,” I’d say to my CEO client. “What about turning it around on yourself? Admit that you need the same things. You’re no better than your employees. One or two of them might even become the organization’s leaders after you’re gone. They are you.”

I wanted clients to see that when they trumpeted their roles as supportive leaders and in the same self-contradictory breath asserted that they did not require equal support themselves,

they were in fact demeaning their employees and the dignity of their needs. And this didn’t go unnoticed by the employees. It was a massive failure in leadership.

Since successful leaders recoil at the thought of failing at anything, it didn’t take clients long to overcome their shame and abhorrence of the phrase “I need help”—and to accept coaching.

They recognized that they would perform better with help, not without it. It’s amazing that smart people had to be told this, but those were the times. Nowadays, the widespread demand for executive coaching is evidence that the company values its leaders and is willing to pay for them to get better.

For a lot less money, committing to the LPR provides many of the same coaching benefits. Above all, it gives you permission to say, “I want to get better and I need help.” This acknowledgment is the price of admission to the LPR.

The more I conducted the Needs Exercise with clients, the more I noticed that needing anything, whether it was help or respect or time off or a second chance, had somehow evolved into an object of derision in the workplace, a character flaw, a weakness as objectionable as being ignorant or incompetent.

The scorned need that continues to baffle me most is our need for approval.

If you Google “need for approval,” the first hundred entries describe it as a psychological defect, selectively illustrated by cringeworthy behavior such as valuing the opinions of others more than your own, and agreeing with people even when you actually disagree, and praising people in order to be liked by them.

My experience with successful leaders is that they’re sensitive to employees’ need for approval and recognition and are very adept at providing it. But for the same reasons they won’t admit they need help, they’re reluctant to acknowledge their own need for approval or recognition.

A leader’s internal sense of validation—i.e., self-approval—should be enough, they tell themselves. Anything else is grandstanding, the equivalent of turning on the Applause sign for yourself. Net result: the CEO’s attitude filters down the line until approval and recognition are denied their rightful place throughout the organization.

This hesitation to seek approval even infects experts on the subject. My great friend (and 100 Coaches member) Chester Elton is the world’s authority on the value of recognition in the workplace. I asked whether he encountered this reluctance to seek recognition among leaders he’s worked with.

“I may not be the right person to ask,” he said. “I went through a period in my life when I was feeling really down. So I wrote a note to a dozen friends saying, ‘I talk about recognition all day. To be honest, I can use some recognition myself right now.’ I received a dozen wonderful letters that made me feel fantastic. They revived me.”

“Sounds like you’re the perfect person to ask,” I said.

“That was one time, twenty years ago. I never did it again,” he said, recognizing his error. 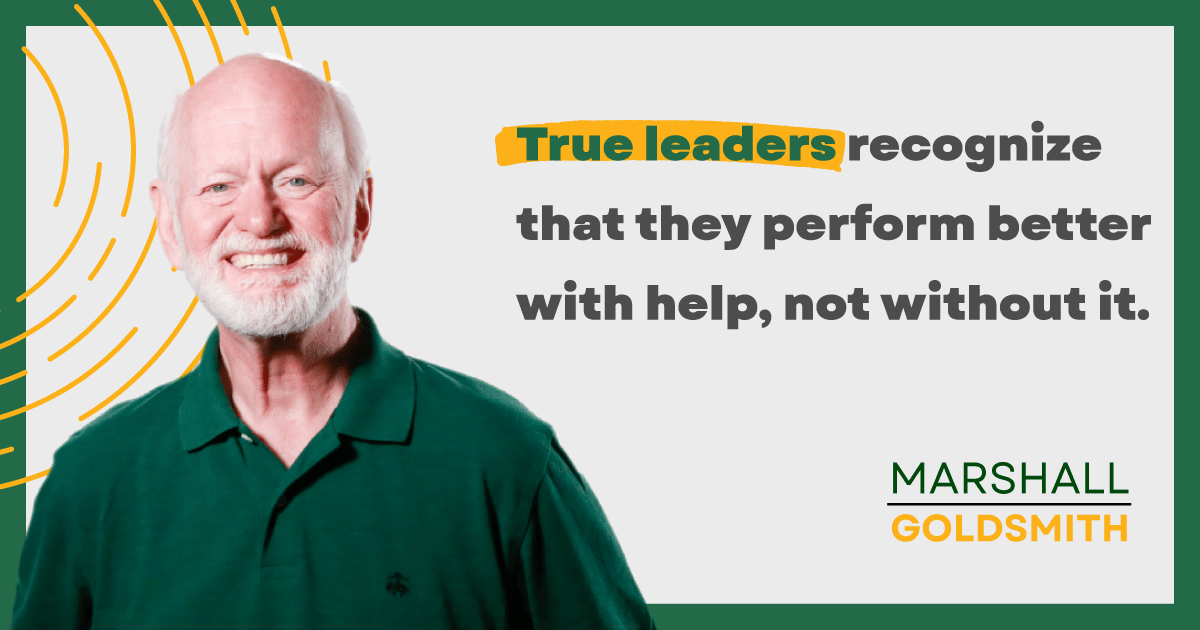